In October 2018 Philip and Christine Kent from England visited the Airplane Creek Memorial. Christine was one of the contributing writers for the book, “These Men of Banstead”. The video of her explains what part she played in the telling the story of one of the eleven men who died in the crash of KK241.

On June 1, 1945 eleven Royal Air Force (RAF) airmen training at 5 OTU Abbotsford, climbed into the B24 Liberator bomber KK241 and flew into thick clouds. Their mission was a navigation exercise to Penticton, then to Revelstoke, and then back to Abbotsford for a journey of 820 kilometers. Their commanding officer was Flying Officer William D A Hill, with Pilot Officer Gibbons as second Pilot and Sergeant Graham Murray as the navigator.

Their last radio transmission was to the Abbotsford airfield requesting their position. Abbotsford airfield’s response was not acknowledged, despite being relayed through another bomber in the area. Further, KK241 failed to report in at its first checkpoint. Over two hundred men, and nearly fifty planes, spent seventeen desperate days searching over 1,120,000 kilometers for the plane.

The wreckage was found near the summit of Mt. Welch, 36 kilometers off course. The retrieval group, led by Command Search Rescue Officer, Squadron Leader Lee, used trucks, jeeps, and even packhorses to get to an advance camp eight miles from the base of Mount Welch. The terrain became so difficult to traverse that the retrieval group had to dismount and hike on foot for three days to reach the wreckage, 2300 meters up the slope of Mount Welch.

Because of the difficult terrain the retrieval group could not carry the bodies down and returned five days later with Anglican Padre Flight Lieutenant Gilbert to bury the remains in a mass grave between the summits of Mount Welch and Mount Still. Their grave was marked with a single white cross bearing their names.  The crash is one of the ten largest air training accidents in Canada during WWII.

On June 11, 1983 Air Cadets from 861 Silverfox Squadron in Abbotsford, under the supervision of Commanding Officer Chris Weicht, constructed a memorial cairn on top of one of the liberators engines on an island in Airplane Creek near the base camp location of the 1945 recovery group.

In 2013, Cadets from 147 Airwolf Squadron  in Chilliwack under the supervision of  Lt. (Navy) Ron Shore CD, and Lt. George Noordegraff surveyed the condition of the memorial and discovered the 1983 memorial had fallen face down into Airplane Creek. A new memorial was proposed to remember the men and a decision was made to incorporate the engine from the Liberator in this new memorial.

The engine was flown out on July 14, 2015. This memorial also pays tribute to the other 55,000 Commonwealth personnel who perished in service to Bomber Command during WWII.

More than 50% of all men in BC and 40 % of all men in Canada aged 18-45 enlisted in the war.   According to the Chilliwack  archives the Blue Hydrangea Living Memorial first started in 1941 had 48 Blue Hydrangeas planted by the end of the war. One for each local air crew who passed during the conflict.  The 49th was planted in honor of the men who died at Mt Welch.

Canada trained over 130,000 men to fly in bombers during WWII, with many of the trainees belonging to the British Royal Air Force (RAF). The crew of KK241 was one such crew. By early 1944, so many crews had been trained that they exceeded the amount necessary to defeat the European Axis forces and were being readied to fight against the Japanese in the Pacific. This monument hopes to keep the memory of the brave men who fought for Canada.

Please take a moment to reflect on the more than 1,000,000 brave men and women who fought for Canada so that we may enjoy our freedom and prosperity.

If people are interested in donating towards the project they can call Robert Love, President of the Veterans Memorial Restoration Society at 1-888-888-4124 or donate at www.GoFundMe.com/AirplaneCreek.  People donating more than $2,000 will have their name engraved on the monument, and people who donate more than $500 will receive a plaque with an engraved 50 caliber shell on it.

For more information on the project please contact Ron Shore at 604-857-2488 or e-mail Ron@RonShore.com 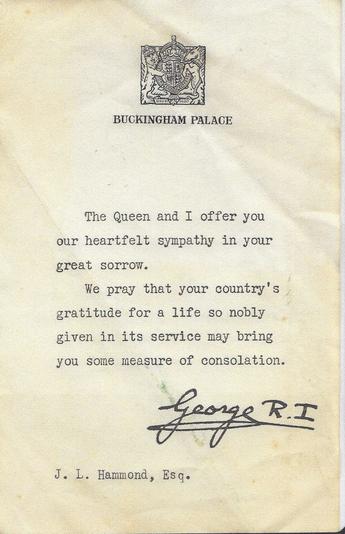 Find the Memorial on the map 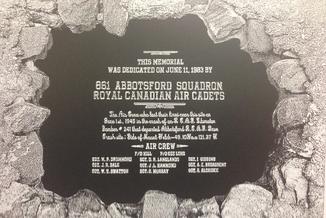 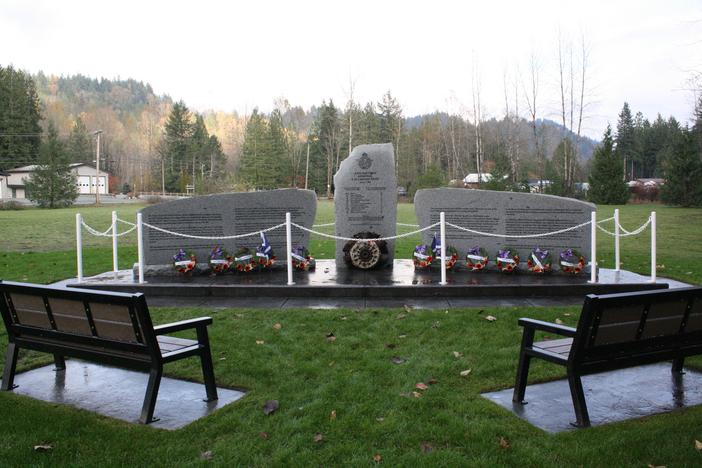 The meaning of a white feather as told by Philip Kent. 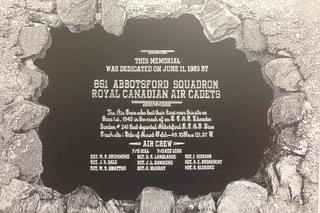 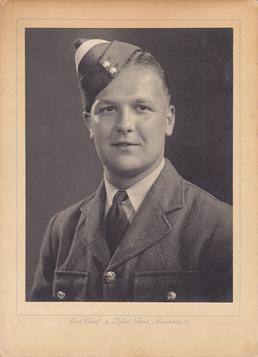 The following series of letters outlines the communication between the Canadian Air Force and the parents of Gordon Hammond. Christine Kent provided these letters while on her visit. 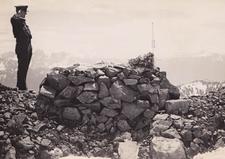 The following photo is a copy of the note sent from the King and Queen of England expressing their condolences. 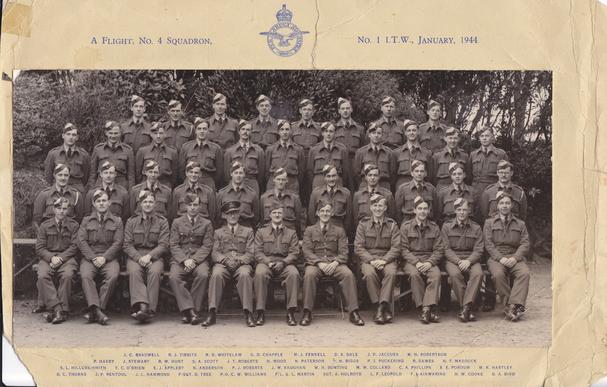 The following photographs are of Gordon Hammond and his training unit. It may be noted that in the group photograph that Gordons’ name shows as J.L. Hammond.