This work depicts an episode in the 3 summers that Captain Vancouver charted the Washington, British Columbia and Alaska coasts, during 1792, 1793 and 1794, and is one of over 50 that John has painted. Periodically through the voyage it was necessary to put the ships on shore for maintenance. To this day there is a rectangle about 50 feet wide and 150 feet long on the beach in Restoration Cove that is cleared of rocks and boulders. Every once in a while after a hard day’s work the crew would drink spruce beer and be given free time to relax and sing.

This work depicts an episode in the 3 summers that Captain Vancouver charted the Washington, British Columbia and Alaska coasts, during 1792, 1793 and 1794, and is one of over 50 that John has painted. This painting depicts his departure in the very early morning from Boundary Bay, with Point Roberts in the background. Captain Vancouver learned very early that he had to survey the coast in the small boats that he had aboard as the large boats, Discovery and Chatham were too big to go into the majority of inlets and passes. This journey was the longest exploration under sail ever, in the history of the world. 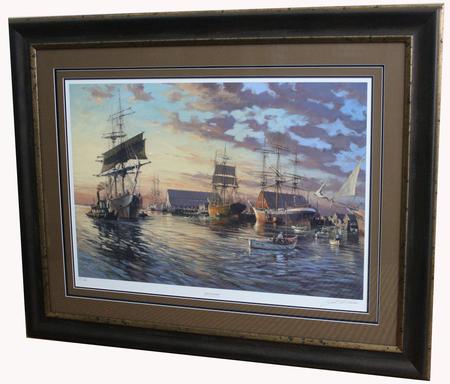 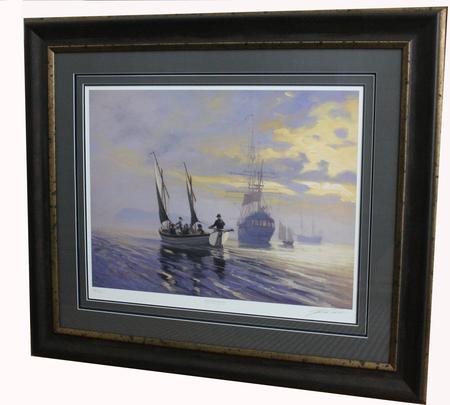 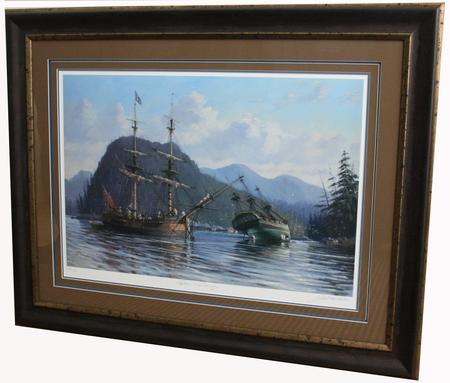 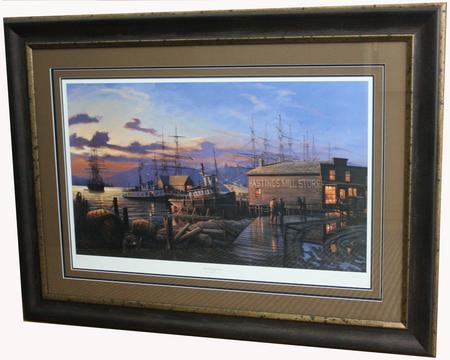 Steveston, British Columbia became established as a major port in the late 1800’s. The rich bounty of salmon that returned each year to the Fraser River gave rise to the building of many great canneries. A large fleet of gillnetters manned by crews of 2 or 3 harvested the salmon with hand hauled linen nets. These frail craft were powered only by sail and oar. Cargoes of tinned or salted salmon were shipped to world markets aboard square rigged sailing vessels, many of which sailed around Cape Horn to Europe. The waterfront must have been an amazing place with all the sights, smells and sounds accented by the varied languages that filled the air.

I Name this Place Desolation Sound

John Horton’s marine art captures today and yesterday – people, places and events as we know and remember them. While there are many artists who paint marine scenes, few have Horton’s ability to delineate accurately the architecture of a ship. Horton’s portrayals range from the Pacific voyages of discovery when captains Cook and Vancouver first anchored off British Columbia to contemporary settings on urban and rural waterfronts. He gives us glimpses of other parts of the world, of the military at work, of bustling ports and tranquil inlets. 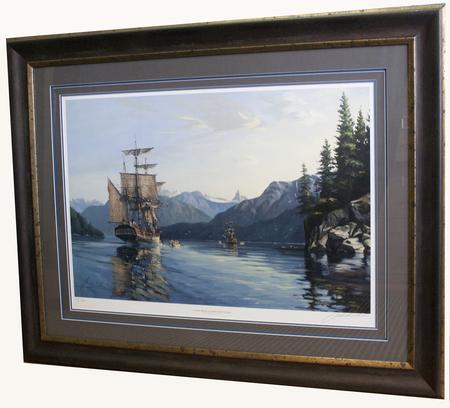 In working with community groups around the Lower Mainland, one of Canada’s outstanding Marine artists, John Horton, has very kindly donated 6 pieces of art to Veterans Memorial Restoration Society to help us in our fund raising efforts. The following pieces of art have been framed and are now ready to sell.  The proceeds from these sales will go directly to Veterans Memorial Restoration Society. If you are interested in purchasing any of these art pieces please call us directly at 604-857-2488.

This work depicts an episode in the 3 summers that Captain Vancouver charted the Washington, British Columbia and Alaska coasts, during 1792, 1793 and 1794, and is one of over 50 that John has painted.The charts he created were so accurate that they compare well with today’s charts, even more outstanding when you remember that most of the work was done from the small ship’s boats. Danger lay everywhere and both Discovery and Chatham grounded on rocks within 24 hours of each other. Discovery, in fact, was nearly lost. The voyage, however, continued and the ships found sanctuary in which to affect repairs. Captain Vancouver named that place Restoration Cove, still known by that name today.

This work depicts an episode in the 3 summers that Captain Vancouver charted the Washington, British Columbia and Alaska coasts, during 1792, 1793 and 1794, and is one of a series that John has painted. Captain Vancouver arrived in Desolation Sound on the evening of the 25th of June. At daybreak they found themselves “about one half mile from the shores of a high rocky island surrounded by a detached and broken country whose general appearance was very inhospitable. Stupendous rocky mountains rise almost perpendicular from the sea.”

From the beginning Vancouver was a lumber port, exporting high grade lumber to world markets. Even some of the great houses in San Francisco were built of BC lumber. The largest mill was the Hastings Mill which lay in the area now covered by the Vancouver Terminal Container port. This fine painting shows the approach to the mill just after sunset, following a shower of rain. In the foreground lumber and dock workers pause on the wet boardwalk to enjoy the evening, swap stories and survey the mill tug up on the “ways” awaiting bottom paint. In the background various lumber ships lie at the dock while one “anchors out” in the stream. A ferry from the San Juan Islands nudges her way alongside to discharge and collect her passengers and freight. And in the far background you can see “The Lions” and Stanley Park. The old mill store served in many capacities over the years and after it survived the “great fire” even offered her top floor as a school classroom for a time. Steeped in history, the Store still exists as a museum, but enjoys a new site beside the Royal Vancouver Yacht Club on Point Grey Road. 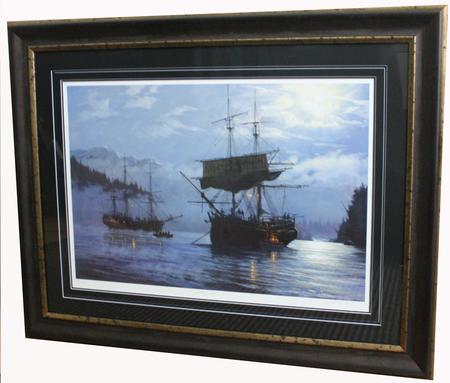